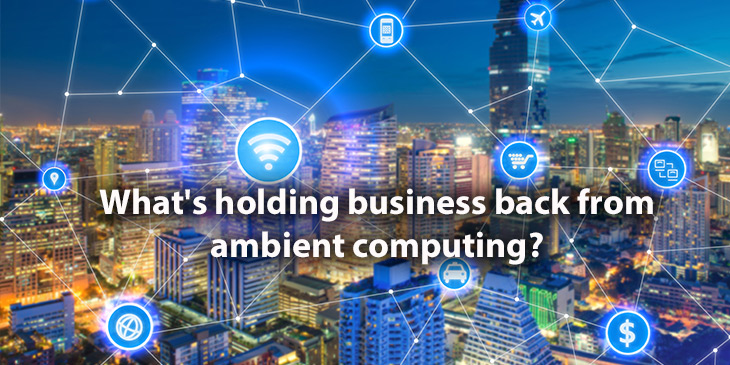 In 2014, Dr Jim Minifie of the Grattan Institute warned small and medium businesses (SMBs) were missing the mobile, social and data revolution. According to the Small Business Administration, small businesses produced 46 per cent of America’s GDP in 2008 (the most recent year for which data is available). With this monster share of the market, Minifie argues SMB tech adoption would mean economic gains throughout the nation. But these major employers were falling behind.

Why? Awareness and security were the big disabling concerns.

Jump to 2017 and SMBs are at a crossroads. The internet of things (IoT) has seen mobile, cloud and data merge into things – sensors, machines and other devices constantly collecting data and storing it in the cloud. And now ambient computing brings those things together into an electronic ecosystem that responds in real-time to user presence and user demands, often through biometic or voice-activated interfaces (like wearable devices and the growing array of microphone-enabled devices like the Amazon Echo and other ‘smart’ home appliances).

Ambient computing has the potential to respond automatically to the presence of people and predict user needs. This is where SMBs stand to benefit from such technology. But if SMBs have struggled with mobile, and data before it — how can they brace themselves for the rise of ambient?

Deloitte says SMBs need to look beyond things: “Deliberate choice and purpose should underpin ambient computing efforts. Analytics – specifically turning data into signals and signals into insight – is a big part of that.”

Deloitte’s warnings from early IoT adopters should be heeded. Avoid fragmentation. Stay on target. Put the user first. This means ensuring your ambient investments aren’t made in business silos. Any business case will need to cross organisational boundaries and deliver to a fundamental user-driven target.

Ensuring any IoT and ambient investment has stakeholder buy-in from across the business is key to easing security concerns too. Data accumulation and cloud storage through multiple mobile devices and sensors undoubtedly has its security and privacy concerns. From internal to consumer data, you’ll need to work across your organisation to optimise security and to gather intel about what and who is at risk.

The potentially limitless scope of computing power that comes with full automation can raise concern among some people too. But smart IoT and ambient intelligence is about equipping the right systems and devices to make the right decisions.

TechCrunch, which just released its own personalised news bot, paraphrases philosopher and technologist Jason Silva in its heralding of ambient intelligence: “AI is simply the outsourcing of cognition to machines, amplifying the most powerful force in the universe, which is intelligence.” Silva tells us there’s nothing to fear.

With time, ambient technology should fade into the background both at home and at work as it becomes more commonplace. This will give you more time to make considered and data-driven decisions as automation manages your administrative workflows and business processes.

The mass uptake of ambient computing in the commercial sector requires SMBs to rewire the way they work. Once they do this, they will begin to understand the true value this technology can offer their businesses.